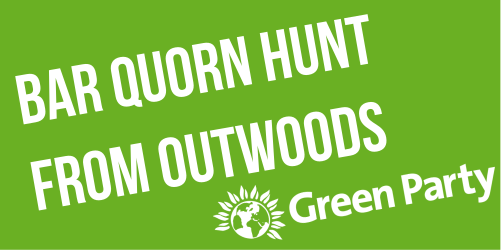 The Outwoods Management Committee last night (16/03) delayed their decision to reconsider Quorn Hunt’s access to the woodlands, amid a public campaign that has seen over 3000 people sign a petition initiated by Leicester Animal Rights calling on the committee to revoke the permission.

Two options were presented to The Outwoods Management Committee by Charnwood Borough Council’s Head of Cleansing & Open Spaces in relation to The Quorn Hunt yesterday. These were to either reconsider the access granted to The Quorn Hunt in 2006, or to reaffirm their permission.

In the spirit of championing the right of users of the Outwoods and protecting a valued local nature reserve, Loughborough Green Party supports the case to revoke the Hunt’s access to the Outwoods.

Local Green Party members have visited the Outwoods and spoken to local people there about the issue. The response was unanimously supportive of an outright ban. Furthermore, we believe that allowing the Hunt to continue to access the Outwoods contradicts the site’s own management plan as well as the deeds of trust.

We are disappointed that the matter was not concluded at last night’s meeting, and urge The
Outwoods Management Committee to bring the matter to a close at their next meeting on 29/06. In the meantime Loughborough Green Party will continue to support local people to protect their natural spaces.

Online petition in support of revoking the Hunt’s access HERE